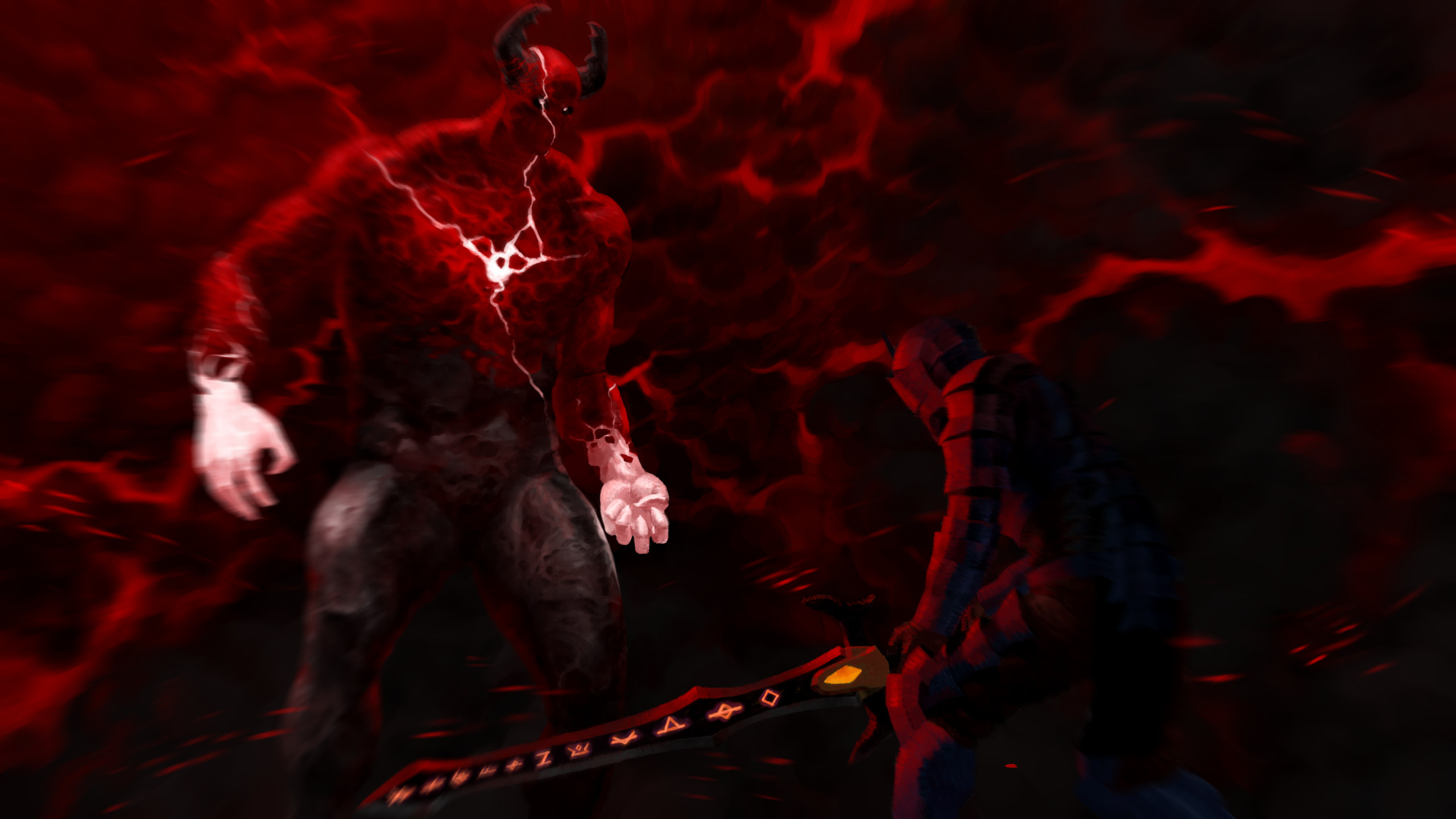 There was once a mysterious man in the town of Mornstead. Some called him a wizard, others branded him a witch. Power like this had never been seen anywhere across the land. He can move objects with the sheer power of his mind, and twist the very fabrics of our dimension to alter materials before your very eyes. Most of the townspeople were fascinated with the powers of this man, some more than others. There was a young boy who was seemingly obsessed with the wizard, sitting at the front row of all his shows and going to his door every day to ask to assist the man with his everyday tasks. As the boy grew older, the wizard grew fonder of him, and found more use for his abilities. He would send him on errands, teach him some of his tricks, and sometimes use him as an assistant at his shows. One day, the wizard decided to take the young man on to be his apprentice. The boy was ecstatic, running around the town to brag about his newfound position. He would turn up promptly every single day to the wizard’s house, trying not to do anything to jeapordise his position as the man’s apprentice. Over the years the wizard would reveal more secrets to the boy, but whenever he asked about one secret, the wizard would screw up his face and scold the boy for daring to ask. This tightly kept secret was seemingly the most important of all, the story of how the man gained his powers. Unbeknownst to the apprentice, the wizard unlocked the power of the Rite of Khronitus, an ancient passage that allows any who recites it correctly to control time and space itself.

As time passes, however, the wizard starts to be encumbered by the effects of his powers. The very Rite that gave him control of time and space, was gaining control of his own body. He lost control of his actions, lost control of his body, then, eventually lost control of his mind. He was subjected to a slow, painful, agonising death whilst lay in his bed. The apprentice was mortified. The apprentice decided to start taking on the roles his master was not well enough to do, although he was not as skilled at it.  He did everything to help his master but there was little he could do besides bring him comfort, until ultimately he ceased to exist. Shocked by the sudden dissaperance of the wizard, the town demanded answers. The boy was unable to provide any logical answers, then the town began to suspect he killed the wizard out of jealousy and stole his power. Eventually, even his own family turned against him, forcing him to flee town. When leaving, he gathered every scrap of paper in the wizard’s house in an attempt to find the cause of death and prove his innocence.

The boy lived off the land, based in a cave studying the notes. There was a consistent theme in the wizard’s scratchings, a runic language of some sort. From digging through the notes he was able to form some sort of glossary of the symbols, each one seemingly associated with a plant or flower of some sort, with the pronunciation of each character besides it. One slip of paper has a sequence of these characters on it, and the apprentice eventually decided to find the plants, arrange them, and recite the characters on the page. Upon doing so, nothing seems to happen, but then he hears a low hum that appears to be coming from the plants laid out on the floor. He recognises the hum from his past, but can’t remember exactly where from. The boy decides to recite the characters again, after which the hum grows louder, and louder. The hum turns into a deafening screech as the boy curls up on the floor in agonising pain. The screech grows louder every second, piercing his eardrums as he lays flat on the ground, unable to move, screaming in pain. In panic, the boy shouts the words one more time, and the screeching just, stops. Pure silence. Tranquility. The boy slowly opens his eyes to see the world around him… still. Rain droplets suspended in the air. Leaves frozen in the wind. He cannot believe his eyes, and as he blinks, time resumes again. But he blinks again, and time stops. With an overwhelming sense of confusion and pain flooding his nervous system, the boy faints as he lays still in the wet grass, sinking into a deep slumber. During this time, the world around him resumes as if nothing ever happened.

Over the next few months, the boy learns to control his newfound powers, performing feats seen in the wizard’s shows that inspired the boy’s childhood. He could slow time at his command, shift objects through dimensions invisible to the naked eye, and stop time altogether with the click of his fingers. As his power grew, he began to change physically, his skin turned red, and small nubs formed on his head. He decided it was time. Time to return to Mornstead and prove his innocence, describing his experiences and suggesting that this power was the cause of the wizard’s death. Upon returning to his village, he decided to tell his family first, surely they would help him explain everything. But when he reunited with his family, they were afraid of his apearance and powers, they shunned him and ran in fear every moment he approached them. After days of trying to reach out to them, he decided to aproach his younger brother as he was fishing alone. However, as he neared, his brother threw stones at him while shouting. Trying to calm his brother, the apprentice was struck by a stone, then he felt a strong pull from his powers and he lost control. As if it were a blur, he tore his brother apart with his powers, without any means to control himself. As he snapped back in control, villagers ran up to investigate all of the shouting. The scene caused them to attack the apprentice on sight, which set him on another loss of contrrol. This eventually led him into the village and ravaging it with his powers. Once the dust had settled, and a quiet hush came over the town, the boy snapped out of his fit of mindless rage, scampering back to what remained of his house in sheer panic. Once he arrived, however, he was greeted with a sight that shook him to his core. The lifeless bodies of his family, sprawled across the floor of his own home.

The boy realizes learning more magic may be the key to prevent it from taking further hold of him, and may give him the ability to undo the horrors he had done. So he sets off to learn to mysteries of this power. As he gains more knowledge, his control lessens and he slips into uncontrollable bouts of rage and destruction, then sharply awakening to the gruesome scenes caused by his actions.

He dedicated his life to finding more combinations, eventually becoming more and more powerful. In total, he finds 6 working combinations, and names them each. Sophros (control), Khronitus (time), Ignotia (fire), Corpulos (death), Gainum (earth) and Anemus (wind). His power now at an apex, he began losing control on a daily basis, spending the majority of his time consumed by the evils rising within him, whilst exacting a heavy cost on the land. People gave up the fight and attempted to worship him in the hopes that he would spare their lives. They called him “Rek-Tu-Hiem”. But he was not interested in followers. His only goal was to undo the heinous acts he committed that night in Mornstead, and bring his family back.

Over time he feels weak and begins to lose control of his mind, body, and soul. He is subjected to a constant burning sensation all over his body, eventually turning his skin into a red, blistered, leathery mess. He is haunted by the spirits of those who he has killed, and the earth seems to crumble beneath his feet wherever he walks. His mind strays further and further away from him, eventually sprouting horn-like tumours from his head. In a state of sheer panic, he returns to his cave, scrambling through the wizard’s texts to try and understand what is happening to his body, or what is left of it. But no luck. The ground-shaking intensifies, and the dirt begins to swirl around his feet. He loses complete control of his mind, and accepts his fate as he is swallowed up by the earth. As his last act in this realm, he writes down a note on a piece of paper.

He wakes up in darkness. No sound, no one, nothing. A faint light appears, coming closer and closer to him, until it eventually surrounds his head, slowly penetrating his brain while exacting a sense of pain he has never felt in his life. Once the agony is over, he opens his eyes and he can see. But his surroundings shock him. He thinks he is in hell. Fire and suffering surround him, and for the first time since he discovered his powers, he is scared. He is surrounded by the drained corpses of those subjected to the same fate as him; doomed to stay here for eternity. All becomes clear to him. He was been banished to the void for abusing the powers bestowed upon him, surrounded by those he killed in his rampage across the lands, and there is no way out. Whenever he closes his eyes, the scene of his family’s murder is played before him, making him unable to sleep, subsequently driving him completely insane. While examining the corpses that lay around him, he is met with a sight that brings him to his knees. His old master. Disfigured. aged, weak. Dead. He attempts to use his powers on his old master, but the powers he once had were gone. He feels helpless, and calls out to the void for help. But he receives no answers.

Over time, Requiem embraces his position in the void. Slowly regaining his powers, and regaining control of his mind and body. He feels powerful again, as if he is one with the very energy surrounding him in the void. He explores the area to learn more about it, and in doing so realises why he cannot leave. The void needs his power. By unleashing the power of the Stormrites into the overworld, he was draining power from the very void he stands in now. Once the void had no more power, it began to fight back. It attempted to drain Requiem of some of his power, but it wasn’t enough. He had to be banished to the void to solve the power imbalance.

Requiem soon realised that the void needs to have power at all times, either in the form of the energy itself, or by holding someone captive who has enough energy inside of them to keep the void going. This was a way out for him. All he had to do was find someone, or a group of people, with enough energy in them to take his place. He sent out spirits to find such an individual, but there was no one with such power anywhere in the overworld. No one had yet discovered the scrolls that he left behind. So he went with his final plan. A plan that, if successful, could free him from his shackles and allow him to live in the overworld again.